Die Stille nach dem Schuß (Silence follows the shot)
This movie has the title "The Legend of Rita" in English.


The Red Army Faction (RAF) was a self-described, communist, anti- imperialist urban guerrilla organisation based in the Federal Republic of Germany (West Germany). The RAF had a theoretically superficial Marxist-Leninist set of politics similar to those of Weatherman in the USA and the Red Army Faction in Japan. These were young people, many of them college students, who felt both a guilt about and sympathy for Third World nationalist revolutions; revolutions they believed, were the vanguard of a world revolution which would eventually sweep the 'fascist imperialist' States away.

Che Guevara captured what Schlöndorff is attempting to portray in his film concerning the mental spirit of these German student, revolutionary romantics when he reflected on his own audacity and political commitment:

"At the risk of seeming ridiculous, let me say that the true revolutionary is guided by a great feeling of love. It is impossible to think of a genuine revolutionary lacking this quality... We must strive every day so that this love of living humanity will be transformed into actual deeds, into acts that serve as examples, as a moving force."

Action and audacity were the Red Army Faction's (RAF) strong suit. "The Legend of Rita" (original German title "Die Stille nach dem Schuß" ) is set in the divided Germany of the 70s. Rita is a young fearless romantic in love with a left-wing revolutionary, one Andreas 'Andi' Klein, a guy who is more or less the leader of an RAF group which she is a part of. Their RAF group is armed, ruthless and robs banks to fund 'the revolution'. These revolutionaries naively explain their robberies in terms of 'anti- imperialist' politics : Yes, out loud, to customers as they clean out the capitalist bank vault and cash drawers, with weapons drawn.

Adrenal rush and surprise hit one in this film from start to finish. From jail breaks to motorcycle chases, to life behind the Iron Curtain, the film comes at you again and again with images you've been brainwashed to feel uncomfortable with. (Caution viewers: you may feel a violation of your Hollywoodised sensibilities.) You'll also feel the kind of careless courage these young people of the RAF had, as they consciously faced death, even as they reached out for a better life-- actually,a better life for others, mostly. As many, many of the New Left, Rita and her fellow RAF members are motivated to take violent political action in order to assuage a deeply felt guilt about being born in First World privilege. They are more moralists than materialists--romantic poets ready to use murder as a political weapon. In the midst of all this direct, violent action, some of them change, become more hard hearted, mechanically calculating. Rita's boyfriend is one of them and when this happens, love dies. Rita is a lover first and a revolutionary second. In her heart of hearts, she wants to settle down, have kids, a husband, the whole modern suburban dream, albeit in a more egalitarian, 'anti- imperialist' society. Rita wants mutual love more than anything else and as she learns more about the duplicitous mendacity of the coldly calculating political apparatus in both the East and West, she comes to the realisation that political States are always ready to opportunistically sacrifice their oft repeated, propagandised moral goals and callously toss human lives on the scrapheap for political gain. As a result, she grows closer to the only person who ever measured up to her romantic expectations, an East German woman named, Tatjana.

Volker Schlöndorff has directed a master portrait of a political situation, a time and a place which is quickly disappearing down the 'memory hole'. Not only are the West German RAF, with their Ton Stein Scherben albums and sneering hatred for bourgeois complacency critically and sympathetically examined; but the 'actually existing socialism' of the DDR of that era is laid bare as well. East Germany is portrayed realistically, down to the last idiosyncrasy, from the near empty roads, to the Radeberger Pilsner, to the workers' apartments in those large, multi- storied college dorm-like buildings in urban East Berlin. This portrait will disturb long held mainstream 'Time' magazine inspired conceptions of East Germany, some would say, 'with extreme prejudice'. Rest assured, the film's honesty extends across both sides of the East/West border. Far from revolutionary or socialist, most of the citizens of the DDR are portrayed as being quite conservative, endorsing whichever police are in charge of the political State. The point is hammered home at the end of the movie, when the fall of the Wall in 1989 is portrayed; a time when Rita and her audience are supposed to come to the realisation of just what die Stille nach dem Schuß entails.


Posted by Mike Ballard at 9:10 PM No comments: 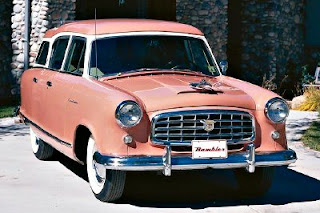 Cherry cokes with
Chuck Berry and Elvis Presley on the juke
waiting for the bus
at the after-school soda shop.
We crowded in the back and rolled
'round corners
looping our way toward
near enough home stops
We were 'bad'
we sometimes sang Coasters' songs
"Why is everybody always pickin' on me..."
mouthing the words to the transistor radio squawk
Tough enough
Posted by Mike Ballard at 3:35 PM No comments: 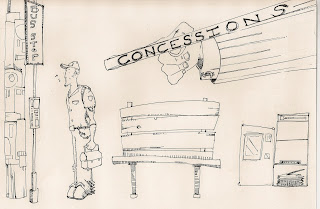 The working class and the employing class have nothing in common. There can be no peace so long as hunger and want are found among millions of the working people and the few, who make up the employing class, have all the good things of life.
Between these two classes a struggle must go on until the workers of the world organize as a class, take possession of the means of production, abolish the wage system, and live in harmony with the Earth.

FROM THE PREAMBLE TO THE CONSTITUTION OF THE INDUSTRIAL WORKERS OF THE WORLD
***************************************************************************
Capital is dead labour, that, vampire-like, only lives by sucking living labour, and lives the more, the more labour it sucks. The time during which the labourer works, is the time during which the capitalist consumes the labour-power he has purchased of him. [4]
If the labourer consumes his disposable time for himself, he robs the capitalist. [5]
The capitalist then takes his stand on the law of the exchange of commodities. He, like all other buyers, seeks to get the greatest possible benefit out of the use-value of his commodity. Suddenly the voice of the labourer, which had been stifled in the storm and stress of the process of production, rises:
The commodity that I have sold to you differs from the crowd of other commodities, in that its use creates value, and a value greater than its own. That is why you bought it. That which on your side appears a spontaneous expansion of capital, is on mine extra expenditure of labour-power. You and I know on the market only one law, that of the exchange of commodities. And the consumption of the commodity belongs not to the seller who parts with it, but to the buyer, who acquires it. To you, therefore, belongs the use of my daily labour-power. But by means of the price that you pay for it each day, I must be able to reproduce it daily, and to sell it again. Apart from natural exhaustion through age, &c., I must be able on the morrow to work with the same normal amount of force, health and freshness as to-day. You preach to me constantly the gospel of “saving” and “abstinence.” Good! I will, like a sensible saving owner, husband my sole wealth, labour-power, and abstain from all foolish waste of it. I will each day spend, set in motion, put into action only as much of it as is compatible with its normal duration, and healthy development. By an unlimited extension of the working-day, you may in one day use up a quantity of labour-power greater than I can restore in three. What you gain in labour I lose in substance. The use of my labour-power and the spoliation of it are quite different things. If the average time that (doing a reasonable amount of work) an average labourer can live, is 30 years, the value of my labour-power, which you pay me from day to day is 1/(365×30) or 1/10950 of its total value. But if you consume it in 10 years, you pay me daily 1/10950 instead of 1/3650 of its total value, i.e., only 1/3 of its daily value, and you rob me, therefore, every day of 2/3 of the value of my commodity. You pay me for one day’s labour-power, whilst you use that of 3 days. That is against our contract and the law of exchanges. I demand, therefore, a working-day of normal length, and I demand it without any appeal to your heart, for in money matters sentiment is out of place. You may be a model citizen, perhaps a member of the Society for the Prevention of Cruelty to Animals, and in the odour of sanctity to boot; but the thing that you represent face to face with me has no heart in its breast. That which seems to throb there is my own heart-beating. I demand the normal working-day because I, like every other seller, demand the value of my commodity. [6]
We see then, that, apart from extremely elastic bounds, the nature of the exchange of commodities itself imposes no limit to the working-day, no limit to surplus-labour. The capitalist maintains his rights as a purchaser when he tries to make the working-day as long as possible, and to make, whenever possible, two working-days out of one. On the other hand, the peculiar nature of the commodity sold implies a limit to its consumption by the purchaser, and the labourer maintains his right as seller when he wishes to reduce the working-day to one of definite normal duration. There is here, therefore, an antinomy, right against right, both equally bearing the seal of the law of exchanges. Between equal rights force decides. Hence is it that in the history of capitalist production, the determination of what is a working-day, presents itself as the result of a struggle, a struggle between collective capital, i.e., the class of capitalists, and collective labour, i.e., the working-class.

From CAPITAL, Volume I, section on the 'working day'. 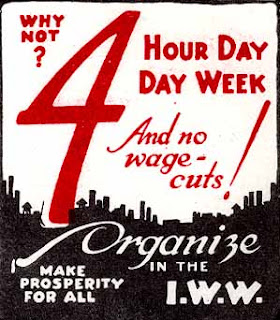