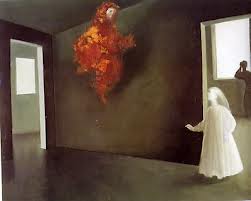 "It is an enchanted, perverted, topsy-turvy world, in which Monsieur le Capital and Madame la Terre do their ghost-walking as social characters and at the same time directly as mere things."  Marx, CAPITAL V.3

"Capital and 'land' in capitalist society obtain magical abilities similar to those of wooden or cloth fetishes in allegedly 'primitive socieites'."  Michael Heinrich, AN INTRODUCTION TO THE THREE VOLUMES OF KARL MARX'S CAPITAL, p.184

Or is it the case that humans produce material things, services and/or ideas. And that the workers (employed for the wages their labour power market for) by the capitalists who own Ford Motor Corporation who actually produce cars using tools, machines and buildings on land owned by others.  And that the land creates nothing, unless human labour is applied its productive use to grow food, mine ore or dam rivers, to use to produce power from dynamos produced by workers.

"Profit seems to be determined only secondarily by direct exploitation of labour, in so far as the latter permits the capitalist to realise a profit deviating from the average profit at the regulating market-prices, which apparently prevail independent of such exploitation."  Marx, CAPITAL V.3

Value, price and profit appear to be generated in the sale of the commodity on the market.  The reality is that the good or service is produced by humans applying skill over time.  Without labour, nothing gets produced.  The fact that labour power is paid for in wages, makes it appear that labour is merely one element of the cost-price going into the finished good or service (the others being the cost-amortizing means of production, raw material and transport, including marketing) as opposed to being the generator of its product, wealth which becomes a surplus of value over and above what is paid out in wages for the value of labour power sold to the employer.  This surplus-value is realised in the market through sale for a price and profit (money in hand), an extra amount of wealth over and above what existed before the workers arrived to begin their eight hours of socially necessary labour time. Mystery solved!  The reality is that capital, land and raw materials produce nothing: THEY ARE INANIMATE OBJECTS.

"In surplus-value, the relation between capital and labour is laid bare; in the relation of capital to profit, i.e., of capital to surplus-value that appears on the one hand as an excess over the cost-price of commodities realised in the process of circulation and, on the other, as a surplus more closely determined by its relation to the total capital, the capital appears as a relation to itself, a relation in which it, as the original sum of value, is distinguished from a new value which it generated. One is conscious that capital generates this new value by its movement in the processes of production and circulation. But the way in which this occurs is cloaked in mystery and appears to originate from hidden qualities inherent in capital itself."  Marx CAPITAL V.3

Socially necessary labour time is the 'hidden' quality inherent in capital--hired human skill.  Capital is a social relation between capitalist employers and labouring humans.  The capitalists produce no value.  The capitalists buy the value of labour power and employ humans for wages to produce more  wealth than the the value inherent in the value of these self-same humans' labour power.  The cost-price of the commodities sold at what appear to be more than their value are actually the product of the unpaid labour time of workers being paid a fraction of the wealth they create.  Certainly, capital + land + labour power=a surplus over and above the cost-price.  But this surplus is not produced magically by capital and land: Madame La Terre seems to produce wealth with her consort Monsieur Le Capital--after the sale of wealth produces a profit.  In reality, these abstractions produce nothing and labour is the source for the creation of wealth not already existing (unrealised) in the ground, in natural resources like gold, iron and fertile soil and in the sea.  To be sure, existing wealth may be found on other planets and in other places in the Universe as human labour fashions the instruments, machines and vehicles necessary for their discovery and use.  But Mercury produces no wealth in 2013.  Neither do Mars or Jupiter.  And without production, sale cannot take place except in the imagination of the beholder.

Posted by Mike Ballard at 1:17 AM No comments:

As we dance here
musically free
discussing philosophy
making love
living our time
the way we want to
the landlord  inspection
will happen
Landlords are like the irremediable  tragedy
of death
Posted by Mike Ballard at 1:25 AM No comments: