What can replace the wage system? 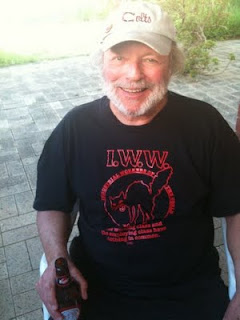 "Instead of the conservative motto, 'A fair day's wage for a fair day's work,' we must inscribe on our banner the revolutionary watchword, 'Abolition of the wage system.' from the Preamble to the IWW's Constitution.

I maintain that the left lost its way sometime after 1910, fishing in the vote getting markets of liberal reformism and shutting out the revolutionaries who spoke of common ownership of the collective product of labour and the abolition of the system of exploitation known as wage labour. The official Marxist-Leninist and Social Democratic left replaced the 'abolition of the wage system' with liberal reformism i.e. with accepting, 'a fair day's wage for a fair day's work' all in the name of 'borng from within' the business unions and the established political States. 'Boring from within' was meant as a tactic; but soon became the strategic goal of the left i.e. to get elected to bourgeois or Marxist-Leninist institutions of politcal power over the wage slaves of the world. To the degree that this point of view triumphed, political amnesia struck the workers' movement. Forgetting that the abolition of wage-labour was the goal of the social revolution, along with common ownership of the collective product of labour, has gotten us to where we are today: with a left composed of radical liberal moralists waiting for a Castro (or fill in some other messiah) to save them, a left that has lost all sense of being part of a social revolution made by themselves and their fellow workers, for themselves as a class. As Marx and Engels put it in THE COMMUNIST MANIFESTO:

"When, in the course of development, class distinctions have disappeared, and all production has been concentrated in the hands of a vast association of the whole nation, the public power will lose its political character. Political power, properly so called, is merely the organized power of one class for oppressing another. If the proletariat during its contest with the bourgeoisie is compelled, by the force of circumstances, to organize itself as a class; if, by means of a revolution, it makes itself the ruling class, and, as such, sweeps away by force the old conditions of production, then it will, along with these conditions, have swept away the conditions for the existence of class antagonisms and of classes generally, and will thereby have abolished [hebt auf (aufheben)] its own supremacy [Herrschaft, rule] as a class."

QUESTION NO. I.
"How will the Co-operative Commonwealth determine the income of each worker?"

How is the worker's income determined today, under Capitalism?

The income of the worker is his wages. That which determines the wages of the worker today is the supply and demand for Labor in the Labor market. If the supply is relatively large, the price of labor-power, that is, wages, which means income, will be relatively low. If the demand is relatively large, then the income, that is, wages, will rise. As the Law of Gravitation may be, and is, perturbed by a number of perturbing causes, so with the Law of Wages: -- combinations of workers, on the one hand, may counteract an excessive supply of Labor in the Labor market, and keep wages up; on the other hand, capitalist outrages, such as shanghaing, not to mention innumerable others, may counteract a small supply of Labor in the Labor market, and keep wages down. In the long, run the perturbing causes cease to be perceptible factors, and the Law of Supply and Demand re-asserts itself.

It follows that, under Capitalism, the status of' the worker is not that of a human. His income being his price, and his price being controlled by the identical law that controls the prices of all other articles of merchandise, under Capitalism the worker is a chattel. In so far as he is a "worker" he is no better than cattle on the hoof -- all affectation to the contrary notwithstanding.

What, on the contrary, is the worker's status in the Co-operative Commonwealth ?

The Co-operative Commonwealth revolutionizes the status of the worker. From being the merchandise he now is, he is transformed into a human. The transformation is effected by his pulling himself out and away from the stalls in the market where today he stands beside cattle, bales of hay and crates of crockery, and taking his place as a citizen in full enjoyment of the highest civic status of the race.

The worker's collective ownership of that which, being stripped of under Capitalism, turns him into a wage-slave and chattel, determines his new status. The revolutionized status, in turn, determines his income.

Whereas, under Capitalism, the very question whether the worker shall at all have an income depends upon the judgment, the will or the whim of the Capitalist, whether the wheels of production shall move, or shall lie idle, -- in the Co-operative Commonwealth, where the worker himself owns the necessaries for production, no such precariousness of income can hang over his head.

Whereas, under Capitalism, improved methods of production have an eye solely to an increase of profits, and therefore are equivalent to throwing workers out of work, -- in the Co-operative Commonwealth, use and not sale and profits, popular wellbeing and not individual richness, being the sole object in view, improved methods of production, instead of throwing workers out of work, will throw out hours of work, and keep steady, if they do not increase, the flow of income.

What we have to deal with here is a communist society, not as it has developed on its own foundations, but, on the contrary, just as it emerges from capitalist society; which is thus in every respect, economically, morally, and intellectually, still stamped with the birthmarks of the old society from whose womb it emerges. Accordingly, the individual producer receives back from society -- after the deductions have been made -- exactly what he gives to it. What he has given to it is his individual quantum of labor. For example, the social working day consists of the sum of the individual hours of work; the individual labor time of the individual producer is the part of the social working day contributed by him, his share in it. He receives a certificate from society that he has furnished such-and-such an amount of labor (after deducting his labor for the common funds); and with this certificate, he draws from the social stock of means of consumption as much as the same amount of labor cost. The same amount of labor which he has given to society in one form, he receives back in another.
Here, obviously, the same principle prevails as that which regulates the exchange of commodities, as far as this is exchange of equal values. Content and form are changed, because under the altered circumstances no one can give anything except his labor, and because, on the other hand, nothing can pass to the ownership of individuals, except individual means of consumption. But as far as the distribution of the latter among the individual producers is concerned, the same principle prevails as in the exchange of commodity equivalents: a given amount of labor in one form is exchanged for an equal amount of labor in another form.

Karl Marx from Critique of the Gotha Programme

"The bourgeoisie has thus made irreversible historical time known and has imposed it on society, but it has prevented society from using it. “Once there was history, but not any more,” because the class of owners of the economy, which is inextricably tied to economic history, must repress every other irreversible use of time because it is directly threatened by them all. The ruling class, made up of specialists in the possession of things who are themselves therefore possessed by things, is forced to link its fate with the preservation of this reified history, that is, with the preservation of a new immobility within history. Meanwhile the worker at the base of society is for the first time not materially estranged from history, because the irreversible movement is now generated from that base. By demanding to live the historical time that it produces, the proletariat discovers the simple, unforgettable core of its revolutionary project; and each previously defeated attempt to carry out this project represents a possible point of departure for a new historical life."
Guy Debord 'The Society of the Spectacle'

My point is that the whole conceptual orientation of Marx, especially concerning the interchangeable use of the terminology of 'socialism' and 'communism' was changed in the left public mind by the weight of the Soviet propaganda machine, along with Marx's notion that socialism meant the abolition of wage-labour and its replacement with a system which would have the transparency of socially necessary labour time vouchers in the first phase of socialism.

"But democracy means only formal equality. And as soon as equality is achieved for all members of society in relation to ownership of the means of production, that is, equality of labor and wages, humanity will inevitably be confronted with the question of advancing farther, from formal equality to actual equality, i.e., to the operation of the rule “from each according to his ability, to each according to his needs”." Lenin THE STATE AND REVOLUTION.

Equality of wages is something Marx ridiculed e.g.:

"What are the mistakes committed by the piecemeal reformers, who either want to raise wages and in this way to improve the situation of the working class, or regard equality of wages (as Proudhon does) as the goal of social revolution?" WAGE LABOUR AND CAPITAL

"Lenin¹s dictum that 'socialism is nothing but state capitalist monopoly made to benefit the whole people,' who must of course trust the benevolence of their leaders, expresses the perversion of ‘socialism’ to the needs of the State priests, and allows us to comprehend the rapid transition between positions that superficially seem diametric opposites, but in fact are quite close." I.W.W. member Noam Chomsky

Lifting the Veil from S DN on Vimeo.
Posted by Mike Ballard at 5:41 PM No comments: 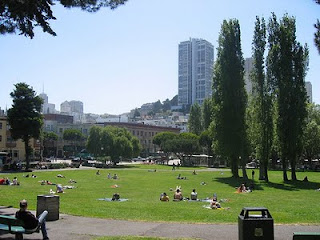 
Workers
misfits
neurotics unite
in the park
to watch and be watched
while a homeless man
holding Santa-sized plastic sacks
delivers invective
to the camped
encamped and decamping
sparing neither old nor young
of either sex
none of them rich
some darker
some white
some sunning themselves
like cold
dry lizards
each in their turn
caught in the moist web
of this demented soliloquy
trying not to pay attention
to the pain
trying to enjoy
their anonymous community
as pigeons fly 'round mown green grass
and gulls peck through trash
blowing between statues to the dead
the man's speech meets the smiling breath
of blind drunk winos
winos snoring
jobless begging
people talking
none of them rich
some of them scared
trying
trying not to show it
frightened at the prospect
of his approach
fearing themselves about to be
contaminated by his misfortune
while others be thinking
'bout madness
'bout violent possibility
thinking hard
'bout this 'rithmetic of misery
Posted by Mike Ballard at 10:27 PM No comments: 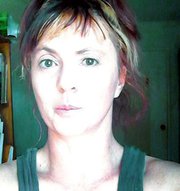