What is socialism aka communism? 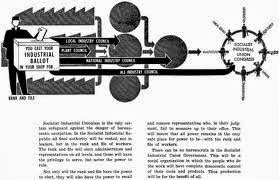 Socialism is not based on the wage system even a transitional 'socialist' wage system. Socialism isn't even about an equality of wages. To paraphrase Marx-- Where there is wage labour, there is Capital.  Capital is fundamentally a social relation of power, the power of the appropriator to own and control the product of labour.  This power is codified and enforced by the bureaucracies of the political State e.g.: the police, the military, the courts and the prison system.

Socialism is based on the producers' common ownership and grassroots, democratic management of the collective product of their own labour.  Production is carried out for use and distributed on the basis of need.  Production is carried out in such a way as to ensure that the classless community can live in harmony with the Earth.  As with labour power, the Earth is no longer a commodity to be bought and sold as it was under the rule of Capital.  In fact, commodity production itself ceases to exist.

Under the wage system, the producers market their labour power to employers for the price of the skill any particular producer is selling.  These skills differ in their price in money depending on: their value i.e. how much socially necessary labour time is embodied in them e.g. education/training and price i.e. what the supply/demand dynamics of the labour market are for the particular skills. To sure their price also depends on the relative strengths of organised labour verses those of the organised capitalists. Capitalists control most of the wealth and therefore are able to dominate the political State.  The State is primarily the organised political expression of the ruling capitalist class and their allies in the landlord class.  The more organised power the workers are able to bring to bear against the capitalists in the struggle over the wealth the producers create, the more political power they are able to exert and the better their working conditions, the shorter their hours of labour and the higher their wages will be.

Under communism, the associated producers plan what they want to enjoy in terms of goods and services, knowing that it is their labour time which will go into creating the total social store of the wealth they own in common. They also know that each producer can withdraw goods and services from the common store of wealth on the basis of how much socially necessary time the individual producer has put into wealth creation, regardless of their particular skill, as it is obvious that the production of this wealth could not be accomplished without every producer's participation in the necessary division of labour in an industrialised democracy.  Of course, there will have to be deductions from this time-based access to wealth used to replace the means of production as they wear out and to allow for those who are unable to participate in production e.g. children, invalids, the sick and those still undergoing training for skills needed in the society to have their needs met. As such, the wage system is abolished as soon as socialism has been established.

In a socialist society, gains in productivity will translate directly into increases in free-time. Freedom like this could be used to spend more time with family and friends or just doing whatever an individual wants e.g. artistic activity, sports or just plain relaxing.

Under capitalism, productivity gains left in the control of employers allow for greater and greater accumulations of capital (the wealth workers produce) and power for the employing class.  As the capitalists politically press to lower wages and working conditions in order to achieve higher rates of profit, productivity gains made by the working class lead to redundancies, insecurity and servility.  All talk amongst workers of organising to legally shorten the work day is met with cries of horror from the capitalist class and their hirelings in the corporate and State media. Imperious pleas for increasing productivity multiply as the blame for whatever current economic slump capitalism is undergoing is laid directly at the 'lazy', 'pampered' workers' door. Unorganised workers tend to be bullied by employers into doing unpaid overtime.

Only the workers acting as a class for themselves can establish socialist self-managed governing structure.  As the history of the 20th century has demonstrated, socialism was never able to be established, although many attempts were made. Parties claiming to have established 'actually existing socialism' for the workers through capitalist State action and 'communist' wage systems have utterly failed to do much more than maintain class rule over the producers and further fetishise the social relation of Capital. 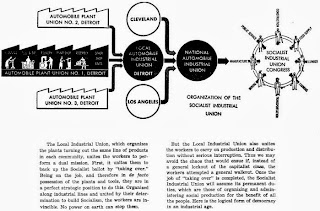 Posted by Mike Ballard at 10:30 PM No comments: